When I found out that import giant Century Arms was interested in sending us a 9mm pistol to review, my initial reaction was indifference. I could vaguely remember seeing some kind of banner for a “Canik” pistol at SHOT show, but I couldn’t recall being very impressed with it.

I looked up the pistol they wanted to send us, the Canik TP9, and found several reviews posted online from the past year or so. That was odd, since Century seemed to be implying that the review gun was a new model that hadn’t hit the market yet. 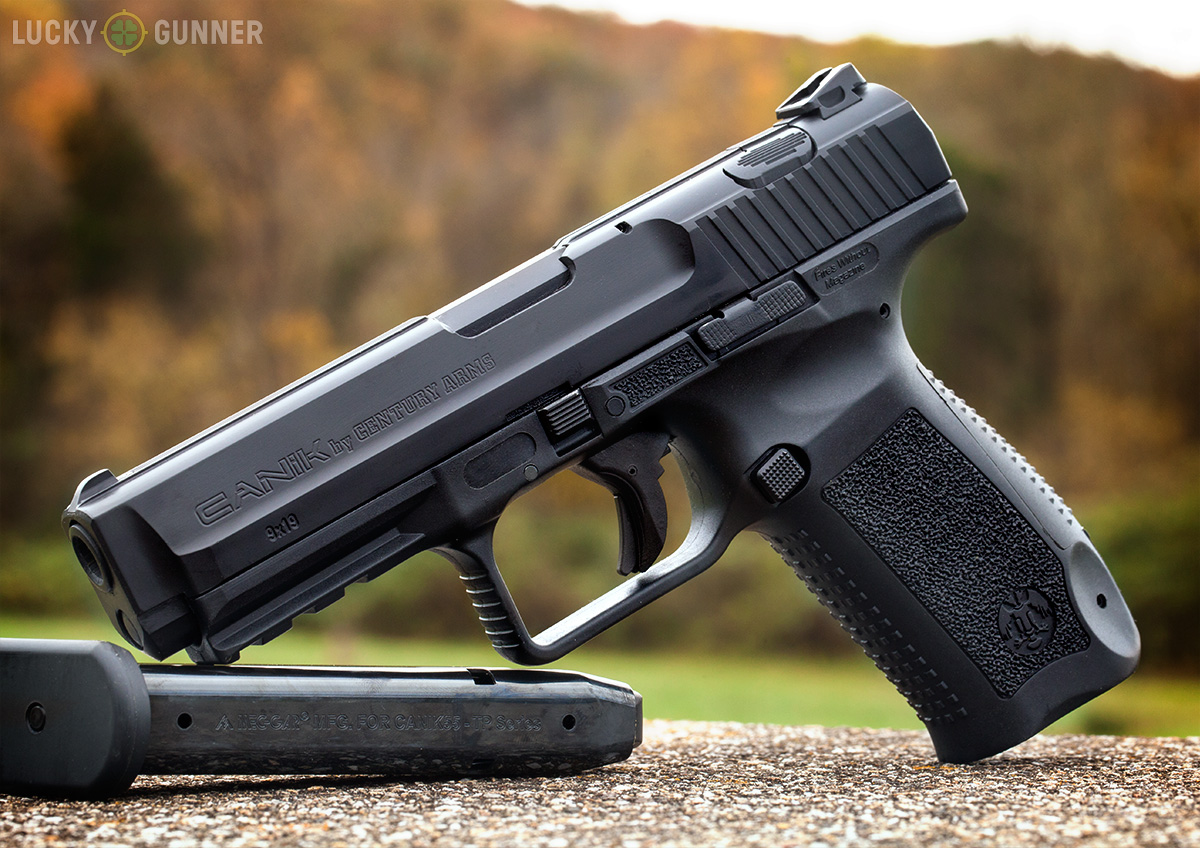 Assuming I had misunderstood, I continued reading up on the TP9 — a striker-fired, polymer-framed full size 9mm pistol that’s essentially a Turkish-made knock-off of the Walther P99. Prices hover around the $290-340 range.

None of that information stimulated my enthusiasm for the Canik. I’m interested in reviewing products that I might be able to recommend as serious self-defense tools. I don’t have much patience for foreign bargain-priced copycat designs of unknown quality.

But, as I’ve mentioned in my past articles on sub-$300 carry guns, there’s a big market for budget self-defense pistols. If the Canik TP9 turned out to be one of the rare exceptions to the “you get what you pay for” rule, then I figured our readers would want to know.

We told Century that we’d be happy to review the pistol if they would provide 1000 rounds of 9mm FMJ ammo for an abbreviated torture test. We were also careful to point out that we couldn’t promise the final results would portray the Canik in a favorable light. Unfazed, the guys at Century were happy to oblige our request, and they shipped the pistol and ammo our way with no strings attached.

When I picked up the pistol from my local dealer, I noticed right away that the action worked differently from the TP9 I had read about in the reviews. Because apparently, this was a different version of the TP9 altogether. It turns out that Century had intended to send us a new gun after all: the new single action only variant of the TP9.

The original TP9 features a striker-fired action that basically simulates a traditional double action/single action hammer-fired semi-auto. Racking a round into the chamber cocks the striker, displaying a red indicator on the rear of the slide. A button on top of the slide partly de-cocks the striker, so you end up with a stiff double-action trigger pull on the first shot, and a lighter single-action trigger on the following shots.

What I received, however, is the Canik TP9SA. Unlike the standard TP9, it has a Glock-like trigger safety so that the gun can safely be carried in single-action mode with the striker pre-cocked. Oddly enough, the TP9 SA still has the de-cocker button on top of the slide, but pressing it causes the trigger to go “dead”, with no double-action option.

The grip of the TP9 SA is also slightly different from the previous model. It lacks the finger grooves on the front-strap, which is more aggressively checkered than the original TP9. Both of these changes to the frame are a deviation from the original Walther P99 design, but I found it to have a good feel when I first handled it.

Along with a pair of 18-round Mec-Gar magazines, a few other accessories were included in the box: a polymer retention holster with a Blackhawk Serpa-style release mechanism and two different types of belt attachments, a magazine loading device, and a large backstrap insert that can be swapped for the smaller insert already in the grip.

True to our agreement, Century also sent us 1000 rounds of 124 grain 9mm Slovak-made Hotshot ammo. The plan was to clean and lube the Canik TP9 once, and then run 1000 consecutive rounds without any additional care or maintenance.

I admit that calling this a “torture test” is a bit of a stretch. The popular “2000 Round Challenge” is routinely used by many shooters as a method for wringing out any reliability defects in a new pistol. Shooting half that many rounds hardly qualifies as a comprehensive test that would push a gun to it’s limits. But that’s not really the goal, here.

The reality is that most folks who are in the market for a cheap $300 pistol aren’t going to shoot 1000 rounds through it, ever. And sadly, many of the companies that make these bargain guns know that, and tend to skimp on quality control as a result. If this particular Canik TP9 SA was the kind of lemon that we often encounter with other models in this price range, the problems would most likely become evident in the first 1000 rounds fired.

Of course, I didn’t want to run ammo through the gun just to find out when it would break. I shot drills, tested for accuracy, and put it through its paces the way I would with any self-defense pistol.

I mentioned that I initially liked the feel of the grip, but that doesn’t necessarily mean anything when you actually start shooting. The Canik TP9 backstrap allows for high hand placement, and the front strap checkering is a nice touch, but there’s still a lot of surface area that’s completely smooth and it slipped around in my hands under recoil.

Felt recoil is always a tricky thing to try to explain because we all experience it differently. The best I can do is compare it to the full size 9mm I’ve recently had the most trigger time with; the Smith & Wesson M&P. Alongside the M&P, the Canik feels heavy and clunky, even though on paper they’re virtually the same weight. But again, “feeling” isn’t particularly important if it doesn’t actually impact the way the pistol shoots. In reality, the perceived sub-optimal balance didn’t prevent me from recording some pretty solid times on the drills I shot at the range.

The overall shootability of the TP9 SA is really a product of the single action trigger. It has a light takeup with a crisp break measuring at 5.5 pounds, and a short, deliberate reset. It’s one of the best striker-fired factory triggers that I’ve had the pleasure of using, including the M&P (or especially the M&P). The trigger is the last thing you expect to like on a budget-priced gun, but the Canik trigger is very reminiscent of the widely-praised trigger on the Walther PPQ. I don’t typically recommend striker-fired pistols with lighter triggers without some reservations — these triggers are inherently less forgiving of errors in gun handling than longer and heavier triggers. That said, the trigger on the TP9SA does yield the desired benefit of being easier to shoot accurately at speed than the typical factory striker-fired gun.

Like most modern handguns, the Canik TP9SA is shipped with a set of plain white three-dot sights with a drift adjustable rear sight. Definitely not my preference, but pretty standard. The sights are more or less adequate, but they appear to be a bit shallow compared to other sights of the same type. At this time, there are few aftermarket sights available for the TP9SA.

I’ll confess that accuracy testing is always my least favorite part of doing a handgun review, and not just because shooting groups is boring. I prioritize factors affecting shootability far above mechanical accuracy when I’m looking at a self-defense handgun (which explains how I can be such a fan of the 9mm M&P despite its infamous sub-par accuracy). Match-worthy precision is nice to have, but in a real world self-defense situation, my shooting ability is going to be a much greater limiting factor than the inherent accuracy of the firearm.

But just to assuage any fears about the Canik’s ability to put holes where they’re supposed to be, I did labor through a few five-shot groups from the bench rest with four different self-defense loads. Three of the four loads produced what I would consider to be excellent groups at 25 yards.

It turns out that Century’s confidence in their pistol’s performance was not unfounded. I fired 1000 rounds of the Hotshot ammo during four range sessions over a two week period as well as a couple of boxes worth of the above hollow point assortment all without incident. In fact, I actually forgot to clean and lube the pistol at the beginning of the test, and only slapped a couple of drops of lube on the slide rails after the first 400 rounds had been fired.

In spite of accumulating a pretty nasty layer of residue from the dirty Hotshot ammo, there were no feeding issues, no discernible decrease in accuracy, and no parts breakages. If you’re willing to call 1000 rounds a “torture test”, the Canik TP9 SA passed with flying colors.

Despite an overall positive experience, I wouldn’t be too quick to encourage anyone to buy a Canik TP9SA right away. It’s not that there’s anything significantly wrong with the TP9 as much as the fact that I still don’t quite know what to make of Canik as a firearms manufacturer. I would be happy to trust this particular TP9 since it has more than proven itself at the range, but that’s just a sample size of one. Until there are more of these pistols out there in the wild being used and abused, I’m remaining skeptical that a mass produced handgun offered at this price point could be made with consistent enough quality to recommend it without some hesitation.

If you’re able to afford to spend another $75 or $100, your options open up to some brands that have more established reputations, domestic factory support, and wider aftermarket support in the form of sights, spare parts, holsters, magazines, and other accessories. But for someone on a tight budget, that extra $100 might mean doing without training ammo or a range membership for a while. For those times when you can’t stretch your budget, affordable guns like the Canik TP9SA have a lot of appeal. If all of them are as reliable as the one I received, then it’s probably the best value in the striker-fired full-size pistol market.

Earlier this week, we posted the photo below on our Facebook page -- that's me holding a heavily modified Korean...