Seeking out quality firearms training is a common theme here on the Lounge, but I realize it’s not always an easy suggestion to follow through on. Good instructors can be hard to find depending on where you live. On top of that, classes are costly, both monetarily and in the time required.

So it would be a real shame if you finally got around to carving some space into your schedule to take that firearms class you’ve been talking about forever, but then afterwards you walk away feeling like it was a waste of time. Or maybe you found the class enjoyable, but your skill on the range shows no improvement. I’ve seen both of these things happen to people numerous times, and I think they can be avoided. When you decide to get serious about your firearms training, here are a few common pitfalls to avoid that often prevent students from getting the most out of the classes they attend.

1. Don’t Do Any Research

The best way to start your training on the wrong foot is to pay no attention to whether the class you’re considering is appropriate for your needs. It sounds simple, but it’s more common that you’d think. Ideally, you’ll find out if the instructor(s) leading your class is qualified and credible, but you also need to have a good idea of what material is actually covered in a given class. For example, if you want to learn how to effectively use a shotgun in 3-Gun competition, it wouldn’t do you much good to sign up for a Project Appleseed marksmanship clinic. Appleseed is a great program, but you won’t walk away with many skills that will help you shave seconds from your 3-Gun scores.

When people have had a negative experience with firearms training it’s usually because they’ve stumbled across a lousy instructor or because they showed up with the wrong expectations about what the class was going to cover. The remedy for both of these problems is to search the web for AARs or “After Action Reports” for the class you want to take. Former students often write very informative accounts about the shooting classes they attend, and they can give you a good idea of whether you would benefit from the same training.

Aside from ending up in a class with a bad instructor, the thing that can most quickly ruin your firearms training is not being prepared. Specifically, not having the right gear, or not knowing how to use that gear. A weekend-long class is a great opportunity to test the limits of your equipment to find out what it’s capable of. It is not a good time to, for example, break out your scope’s user manual for the very first time and read that the proprietary bullet drop reticle only works with certain ammo (which just happens to not be the ammo you brought).

Unless you’re attending a very basic beginner course, you should know how your gear works, sight in your guns in advance, and take all your equipment out for at least a quick test drive on the range before taking it to a class. Showing up unprepared doesn’t just waste your time, but can hold back everyone else in the class while they wait for you to get your act together.

Gear problems aren’t limited to firearms and accessories, however. Be sure to check the weather forecast ahead of time so you can pack appropriate clothing, and then pack for the opposite, too. I think I’ve used both a rain jacket and sun screen at just about every firearms class I’ve attended, regardless of forecast or season.

We don’t attend training to get an ego boost. We do it to be challenged and to learn new things. In every shooting class, you will inevitably be exposed to some new concept or technique that you haven’t tried before. Or maybe one you’ve tried in the past but didn’t care for. Do yourself a favor and try it anyway. As long as what the instructor is suggesting is not unsafe, it doesn’t do any harm to attempt to understand why some people find it to be a viable technique.

My personal goal for learning new techniques in a class is to attempt everything that’s endorsed by the instructor at least enough times that I can duplicate it myself at home after the class. That way I can experiment with it later on and maybe figure out how to make it work for me even if I struggle with it during the class.

In a carbine class I attended a couple of weeks ago, the instructor demonstrated a technique for trigger manipulation that goes counter to just about everything I’ve ever learned in the past. I set aside my skepticism and tried it his way for the duration of the class with mixed success.  I think with some more practice, it might turn out to be an improvement over the technique I currently use, so I plan to keep working on it. But whether or not I end up adopting the technique permanently, I will have learned something that I might have missed if I had not been willing to try a technique that, on the surface, seemed “wrong” to me.

Speaking of taking techniques home with you, that’s really at the heart of why formal training exists to begin with. Going through a class is only marginally useful unless you take what you’ve learned and develop it on your own time. I’ve occasionally heard people boast about how many cumulative hours of firearms training they’ve had, as if that’s an immediate indicator of their skill level. Obviously, I’m all for getting lots of training, but you’re unlikely to actually improve much in the long run unless you practice what you’ve learned. The class itself isn’t what makes you a better shooter — it’s drilling those techniques over and over until they become automatic.

There are other pitfalls to getting the most out of your firearms training, but from what I’ve been able to observe, these four are some of the most common. If you’ve got any others to share, feel free to let us know in the comments! 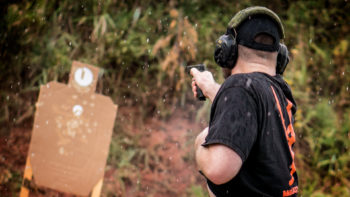