We’re taking a quick break from Make Up Your Mind Monday this week in order to bring you a review for PCP; a new polymer cased rifle ammo that’s just recently become available in limited quantities and, for now, only in the .308 Winchester cartridge. I had a chance to test out a few boxes of this ammo recently, and you can see the results in the video above.

We teased this review a couple of weeks ago with an image on Facebook, and you guys immediately had a ton of questions and comments. Understandable, considering the unique nature of the product . In addition to the product demo, we talked to Tony Padgett from PCP last week and passed along a few of the questions you asked.

Q&A with Tony Padgett from PCP

Lucky Gunner: A lot of people are asking about whether PCP can be reloaded. The PCP website says that it’s not recommended at this time. Can you elaborate on that?

Tony Padgett: The case capacity is different. It’s slightly less than a standard .308 case so if you take your typical load recipe out of a book, those pressures are not going to be the same. You could take a max load of a powder that doesn’t fill to full capacity and put that in our case and get significantly higher pressures because the capacity is different. We’re still talking through the business aspects for just selling cases. We have several ammunition manufacturers who are interested in loading polymer cases in their name and everything else. I would expect at some point we’ll put some information out on those loads we feel work well. At this point, we haven’t loaded a whole lot of different projectiles. We only typically use about four different projectiles [for .308]; 168, 175, we shot a lot of 180 ball for military stuff but we haven’t targeted the reloaders yet. Our ballistician somehow manages to shoot a lot more than the number of cases we give him. But we cannot recommend that it should be promoted at this point. We know that our loads are safe but we can’t say if others will be. 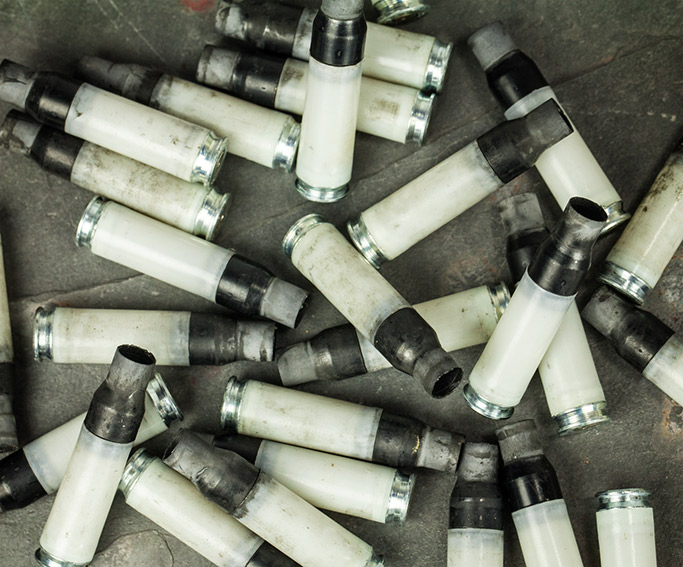 “The [PCP] case capacity is different. It’s slightly less than a standard .308 case so if you take your typical load recipe out of a book, those pressures are not going to be the same.”

LG: Is there any chance we’ll ever see PCP ammo loaded with expanding bullets for hunting?

TP: We’re actually looking at that right now. Component availability is still challenging at this time. The big thing is trying to find projectiles that work with our current inventory of powders. We can’t make large changes in our projectiles and still use the same powders. Right now, we’re looking at 165 grain Sierra GameKing and we’ve had great luck with that one. That’s probably the first one we’d put out hunting-wise. We’re still collecting information from this initial release. We’re hoping the majority of the people who did participate will fill out the questionnaire and get us that data.

LG: What do you believe this ammunition offers that a traditional brass cased round does not?

TP: It depends on the shooter. Obviously, the initial design goal was to reduce the weight; achieve the same performance as M80 ball and reduce the weight. Our cases weigh about half of what a brass case weighs. We have found other benefits. For instance, reduced chamber temperatures.

LG: We’ve read that PCP Ammo doesn’t transfer as much heat to the chamber of the firearm as some brass rounds might.

TP: The chamber does remain cooler with ours, based on government testing done at Fort Bragg. In one case, they ran a string of 300 to 400 rounds through an M249 then they shoved their finger in the chamber right after. I wouldn’t recommend doing that with brass ammo.

LG: Is there an advantage to a cooler chamber? Isn’t the barrel still getting hot from the gases that propel the bullet out?

TP: Your chamber will get hot because that heat is going to conduct through the barrel back to the chamber. Typically, metals will wear more when they’re hot. So in applications where you are heating things up significantly, it will reduce wear. But it’s not your typical shooter that will notice that – it’s machine guns – things like that. For most people, we have found that they get better accuracy from our cases than a typical brass case. That’s a tough thing to prove because if you’re shooting our factory load, that’s not really optimized for any firearm, it’s built to be used in gas guns, bolt guns, different chamber configurations. If you’re a handloader, you’re going to get better performance out of whatever is configured for your gun. However, if you take a polymer case versus a brass case, you’re going to see better groupings with the polymer case. You get better powder ignition because one of the things that happens when the cartridge is fired — the powder in the case that is along the walls of the brass case, burns much, much slower because the brass case is absorbing that heat and transferring it to the chamber. It doesn’t burn as consistently. If you put an insulator in there, the powder can burn much more efficiently. More consistent powder burn leads to better precision.

“We don’t see this being the ammo you go blow through at the range for a day of fun. We’ll always be more geared toward precision shooters.”

LG: When will PCP Ammo be more widely available?

TP: We’re waiting to get the feedback to determine if we want to make changes to the load. We’re ready to produce now. We are production ready but before we run a couple hundred thousand rounds in a week we want to make sure we have what we want to put out there.

LG: For this first limited run of ammo, PCP is priced at about $2 per round. What do you anticipate the actual MSRP will be when launched nationally?

TP: It’s tough to give a price but I can say as our volumes go up, we’ll be able to bring our costs down. Those savings will be passed on. As we’re able to refine our processes, I’d expect our price to come down quite a bit… We don’t want to be the most expensive thing out there, but I don’t see us being the cheapest thing out there at this point. We don’t see this being the ammo you go blow through at the range for a day of fun. We’ll always be more geared toward precision shooters. If we’re making a quality product, we don’t want to use sub-precision components. However, things like a government contract would allow the price to come down even more.

PCP ammo is now available directly from PCP in limited runs. Sign up on their website to be notified when their next batch is on sale. If you have any other questions about PCP ammo not covered here, let us know in the comments and we’ll try to ask the PCP guys when we head off to SHOT show next week.