Splitting the difference between the full size and compact versions of the Beretta 92 is the Centurion — a “just right” variant of the classic DA/SA pistol that, until now, had been out of production since 2004. This year, Wilson Combat has teamed up with Beretta to bring us the 92G Centurion Tactical. I’ve been at the range working with one that Wilson Combat let us borrow for this review and I’ve been pretty impressed with it. Details are in the video below, or you can scroll down and read the full transcript.

The 92G Centurion Tactical is the latest collaboration between Beretta and Wilson Combat. The Centurion variant of the classic 92 design has a full size frame with the shorter slide and barrel of the 92 compact. Centurion variants were a regular part of the Beretta product lineup from 1992 until 2004. So if you look hard enough, you can find an older used Centurion, but it’s probably not going to be a G model decock only variant like this one and it won’t have any of the other recent improvements that Beretta has made to the 92 series.

The new Centurion Tactical combines some of the best features of the Beretta 92A1 and the M9A1. The frame has an accessory rail and aggressive checkering on the frontstrap and backstrap. The slide is a shortened version of the Vertec slide, so it’s got a dovetail cut for the front sight instead of an integral front sight like the old Berettas had. 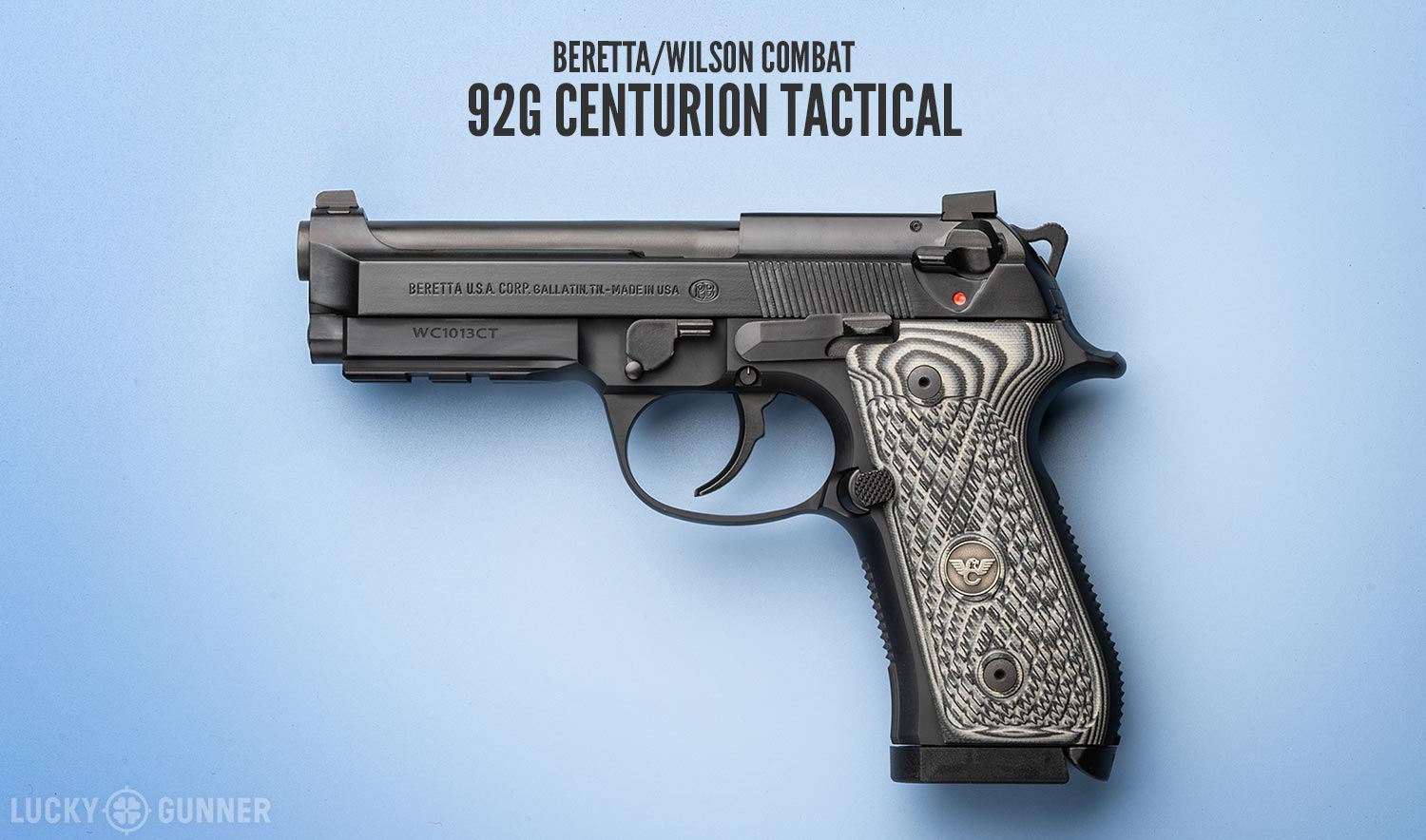 Wilson has a few different options for the sights, but the default on the Centurion Tactical is the U-notch rear sight with the Ameriglo Hackathorn front sight — that’s a tritium night sight insert with a bright day-glow orange ring around it. I’ve used a front sight like this on a few of my carry guns in the past and it’s really easy to see in a lot of different lighting conditions. For a while, I also thought the U-notch rear sights were pretty cool, but now I think I prefer a standard square rear notch. For me, they are a little better for precision without sacrificing speed. Fortunately, Wilson does make a very nice serrated black square rear sight for the 92 that’s available on their web store. 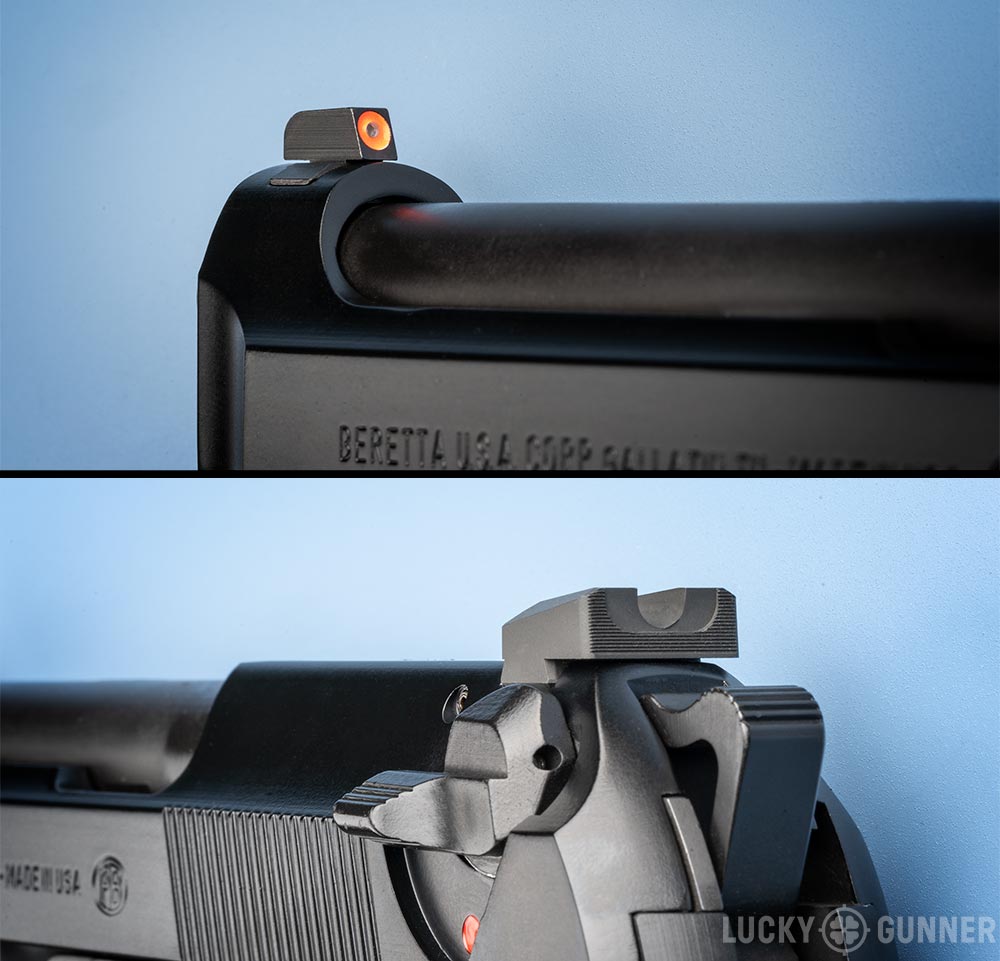 Other upgrades include the G10 slim grip panels — they’re a major improvement over the standard plastic grip panels. It’s got the Wilson Combat mag guide, a beveled magazine well and an oversized mag release all to help speed up those reloads. The barrel has a recessed crown and the hammer is the skeletonized Elite II style. It comes with three magazines — two 17-round mags and one extended 20-round mag.

Wilson Combat can do a really slick action job on Berettas, but that does not come standard with the 92G Centurion. That’s an option that will cost an extra $135. However, every Centurion Tactical does have the Beretta D hammer spring installed which makes the double action trigger a couple of pounds lighter than standard. The Wilson action job is an upgrade I would recommend, but even without it, like most Berettas, this is a very shootable gun with just the D-spring. 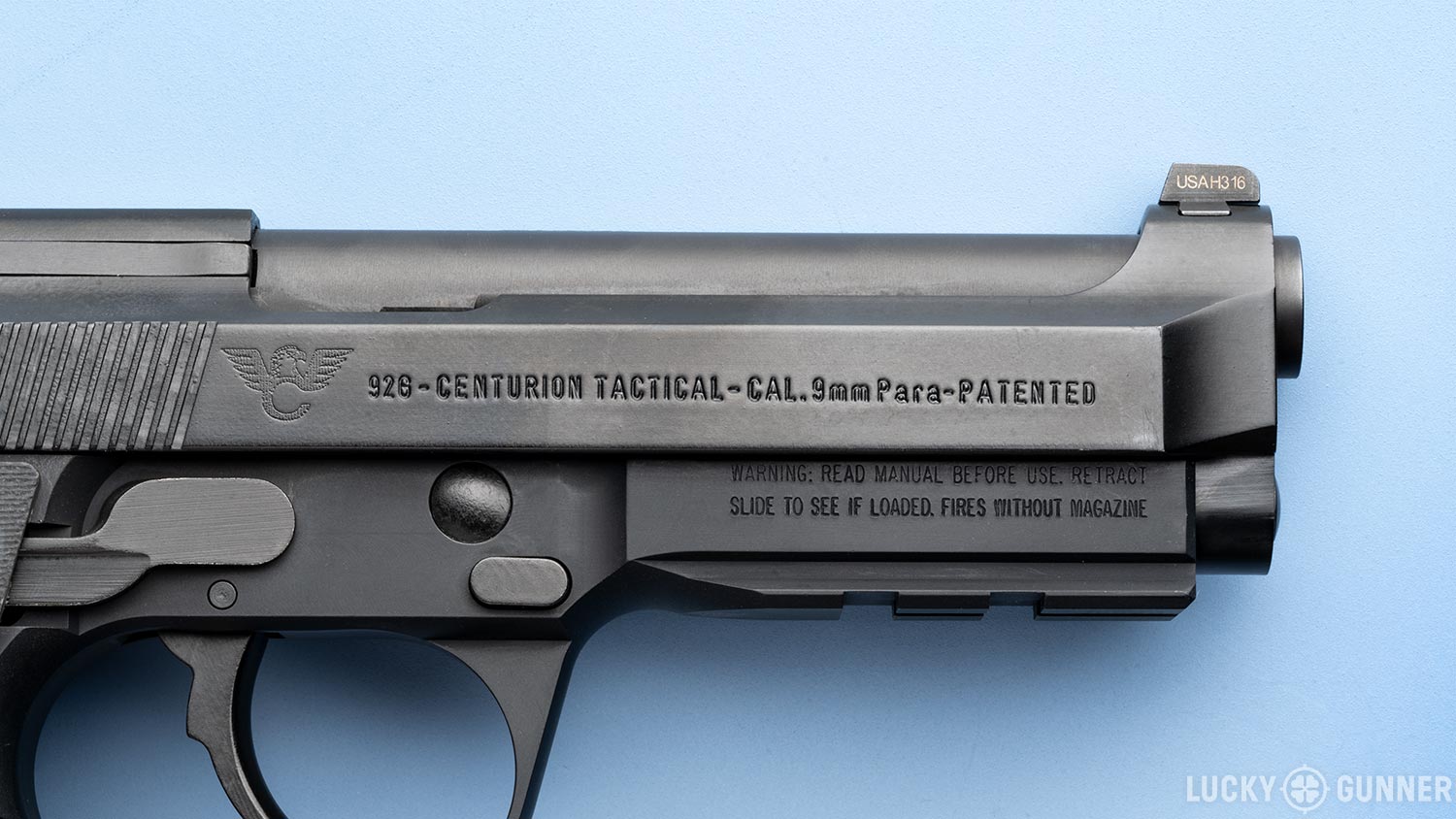 It’s no secret that I am a big fan of Beretta 92s, especially the decock only configuration. I have devoted a few videos to them in the past. They are not everybody’s cup of tea, and I understand why. They are big and heavy. The trigger and the other controls are hard to reach for some people. But they happen to fit my hands really well and I just shoot the 92 better than most other handguns. 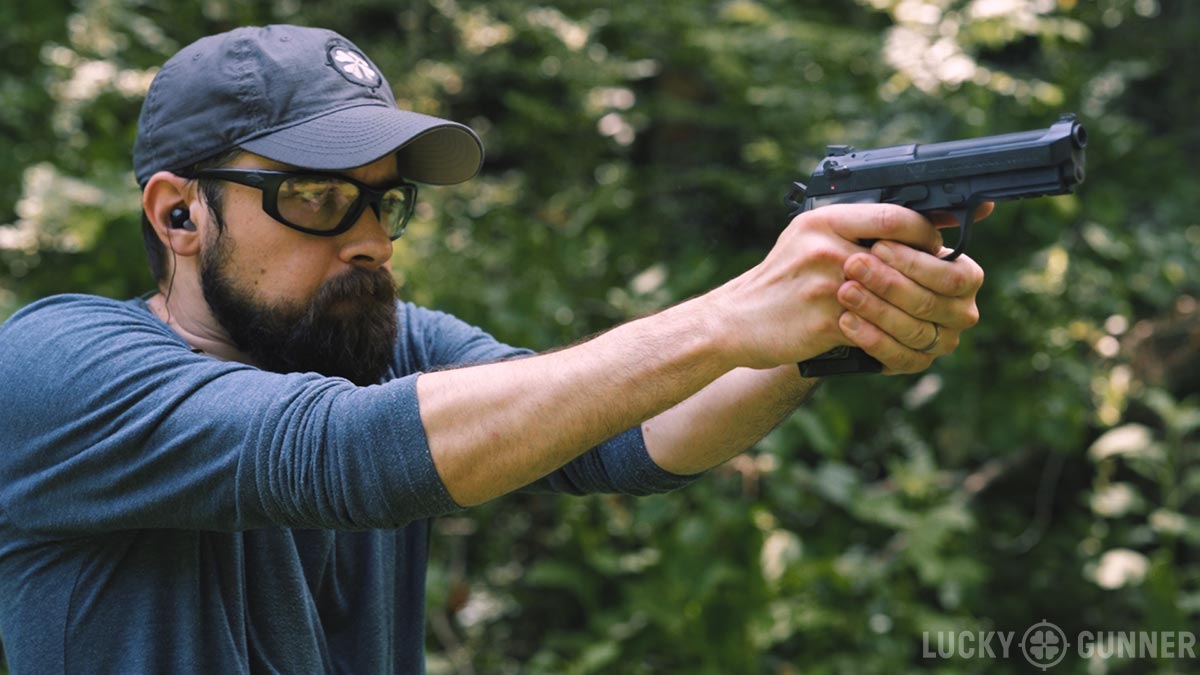 I don’t, however, carry a 92 very often because of the size and weight. The Centurion is intended to be a more carry-friendly version of the 92, and it is… a little bit. But it’s not what you would call compact. The outer dimensions are comparable to most full size 9mms, and it’s quite a bit heavier than a polymer striker fired pistol.

But a lot of 92 fans are drawn to the Centurion models not so much because they are easy to carry, but because of the way they balance. And this is one of those things that’s kind of subjective, and you have to trust that the numbers and dimensions you see on paper don’t tell you the whole story of how a gun is going to shoot. Even though the Centurion is only six tenths of an inch shorter than a full size 92A1 and they are basically the same weight, the Centurion just handles differently. The recoil impulse is different. It’s not necessarily better or worse. It’s got some intangible qualities that make it unique among other pistols in the 92 lineup. 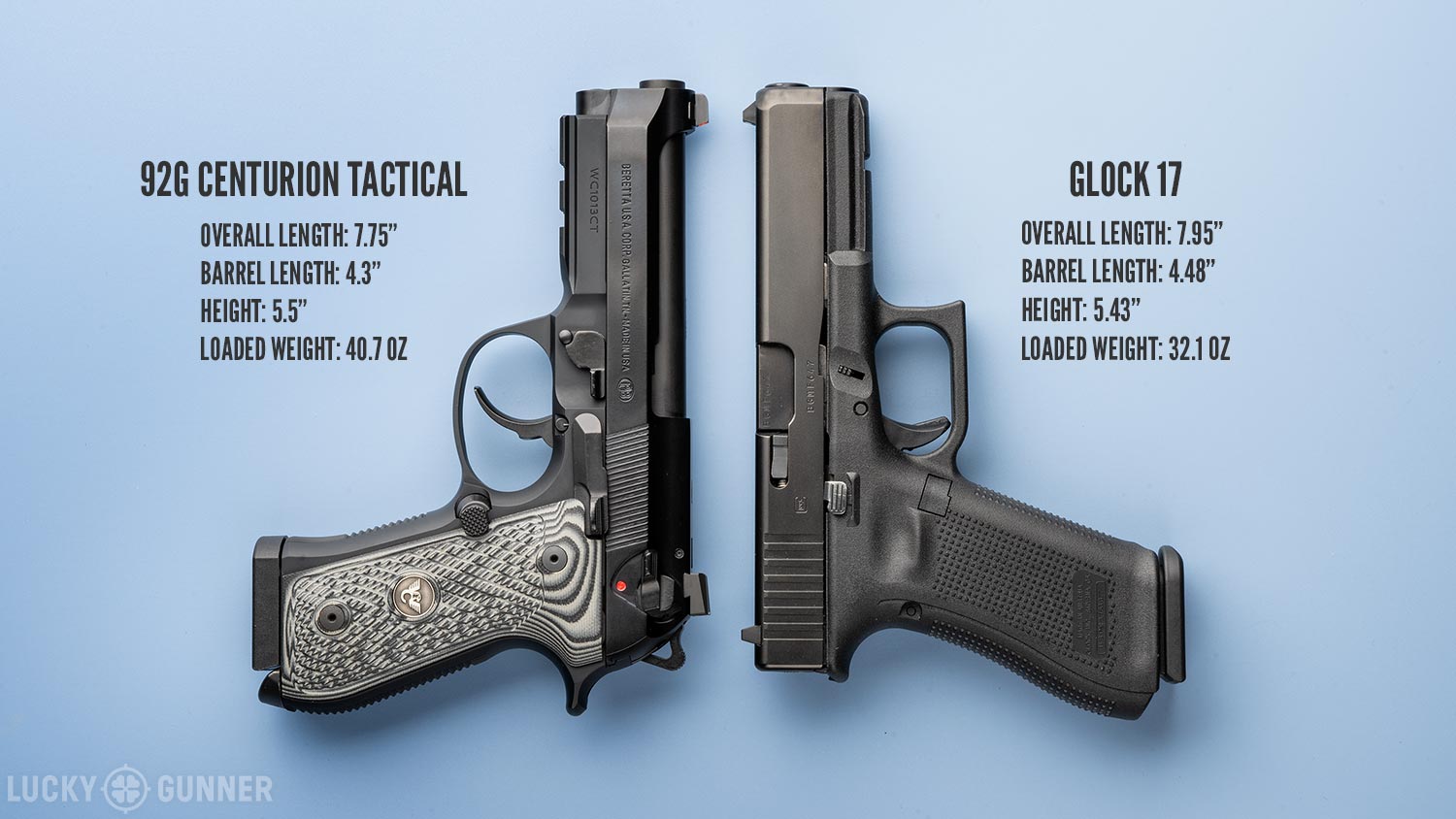 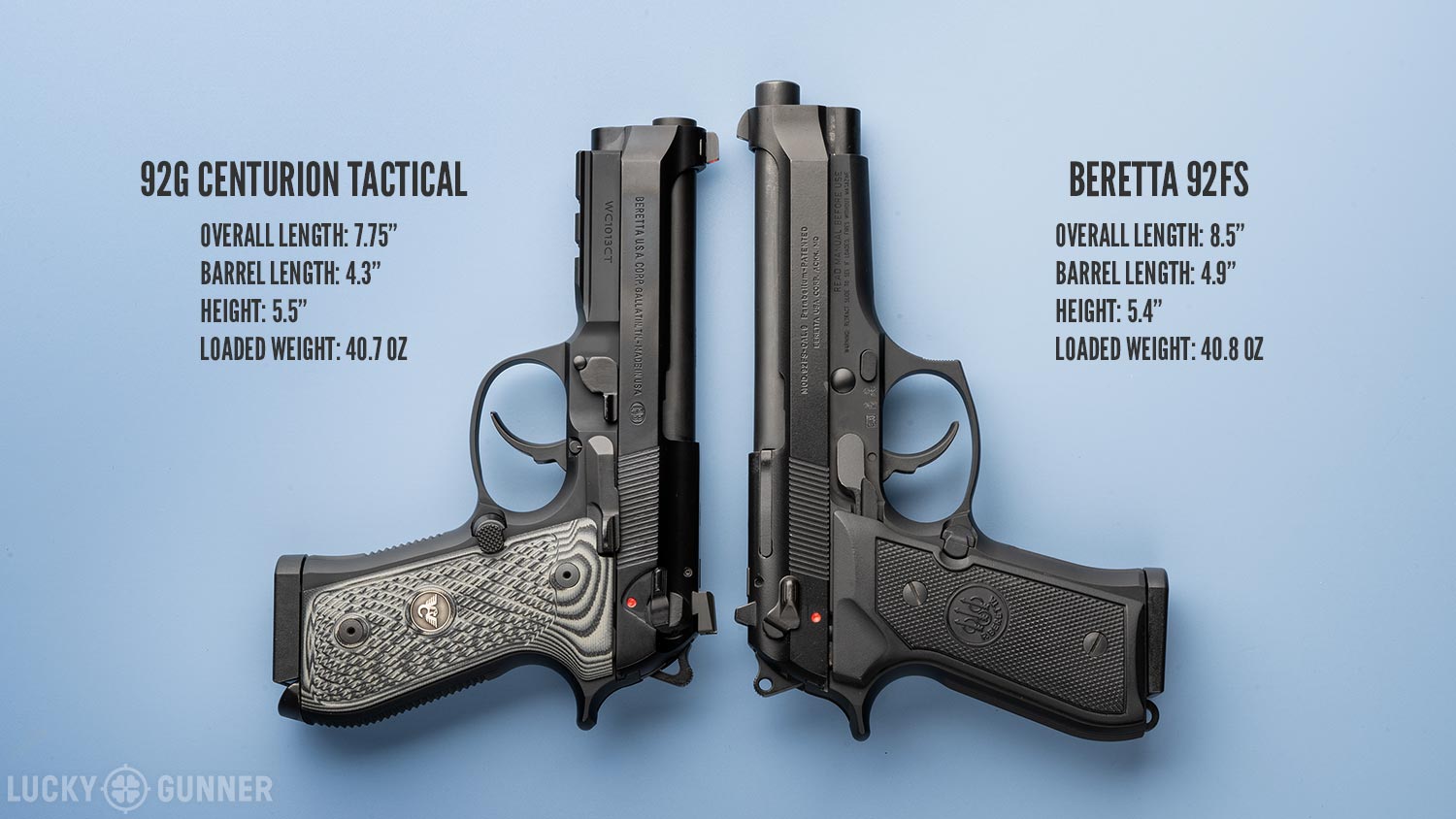 It’s hard to make any direct comparisons to full size 92 models just because there aren’t any that are configured quite like this one right out of the box. The closest thing to compare it to would be the Wilson Brigadier Tactical. That’s a really nice gun, but I definitely prefer the Centurion. For me, the Brigadier slide makes the gun feel top-heavy and the sights don’t settle as quickly between shots. So I’m tempted to say that if I were to buy a 92 today, the Wilson Centurion would be my first choice, but… Ernest Langdon recently announced the upcoming release of the gun he’s been working on with Beretta — the 92 Elite LTT, and it also looks very promising.

So, I’m not sure which one I’d prefer, but however you want to look at it, right now is a great time to be a 92 fan. If you like these pistols and you’ve just been waiting around for one to come out that’s got just the right set of features, you might want to take a look at the Centurion Tactical.

The Hateful 8 drill might be the toughest we've attempted so far in our Start Shooting Better series. If you're...