The new Sig Sauer P320 wasn’t exactly a rock star of SHOT Show, but there are plenty of fans out there who have been waiting for a striker fired Sig that can compete head to head with Glock and the S&W M&P. The primary market for this pistol is the Law Enforcement community, with the civilian self-defense market being a secondary concern. However, if the P320 takes off, I would expect to see more attention given to the civilian side, with support for competition/target versions of the pistol, and varying colors and finishes to appeal to different consumer preferences.

We talked to Dylan Kenneson from Sig Sauer Academy at SHOT Show and asked him to tell us what the P320 has to offer that its competitors do not.

I had a chance to handle the P320 for a bit at the Sig booth at SHOT Show. I was surprised at how light it seemed to be. On paper, its unloaded weight is comparable to other full size polymer pistols, but the P320 looks a lot like a classic steel-framed Sig, which are pretty hefty guns, so you don’t expect it to feel like picking up a Glock 17. Fans of Sig’s classic series should also be pleased that the P320 feels like a Sig. The “melt into your hand” style grip of the Sig has been a big selling point for the pistol in the past, and that feature hasn’t gone anywhere. The three different sized grip modules will make the trademark Sig feel accessible to even more people, since it will now accommodate those with smaller than average hand-size. 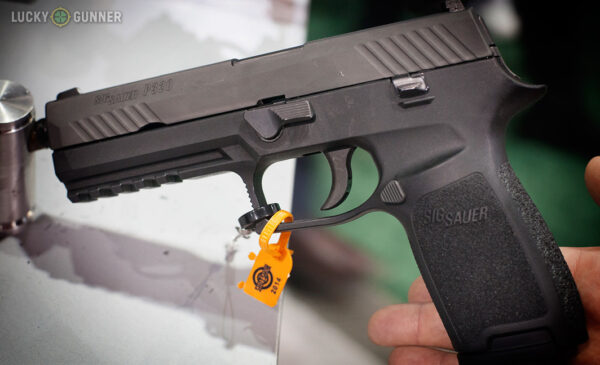 The modular grip, along with several optional safety features should make the P320 very attractive to the law enforcement market that Sig is targeting with this release. There are a lot of agencies out there still using classic Sigs, but their popularity has waned significantly. The heavy DA/SA pistols are still good performers at the range and in real-life scenarios, but most departments are seeing the advantages of lighter weight, consistent trigger pull, and adjustable grip sizes, especially as they relate to training and to equipping personnel with varying needs. Those departments who like their Sigs but want 21st century features will now have an option.

The modularity potential is very interesting, but we’ve seen this before from Sig with the P250, and it didn’t quite pan out as everyone had hoped. Whether this was because Sig was slow to roll out the promised options or because of the P250’s functionality problems at its initial launch, many consumers will be skeptical of Sig’s claims regarding the P320. Fortunately, the P320 is a completely different design from the P250, which should help to calm the fears of those who had bad experiences with the P250. We’ll be keeping an eye on this pistol, and we’ll be sure to let you know if we have the chance to try one out at the range as we get closer to the product launch. 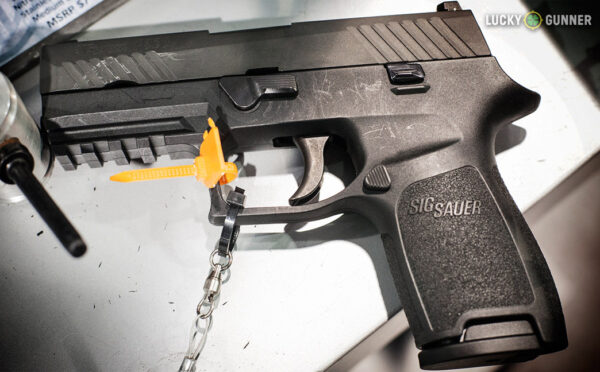 Dylan Kenneson: Obviously, Sig is known for its hammered guns. This year, this our first jump into the striker fired platform, so we’re super excited about it. We did a bunch of different variants on it, so in a sense, it’s modular… And by the way, this gun is complete 100% LE driven — so we had a whole bunch of law enforcement folks come to us and say “hey, we need this” and this is what we came up with… It’s fully modular, so if you have folks with smaller hands, we have a grip frame that will fit them. There are six different configurations in sizes and circumferences of the grip right now that really make the gun fit the shooter. On top of that, the disassembly of it is a key feature because it’s 100% safe; meaning you have to clear the gun including having the magazine out, slide locked to the rear, and no pulling of the trigger to disassemble, so that’s a key safety feature.

LG: Will all of those different options for modularity and calibers be available at the initial product launch?

DK: In a sense, we’re kind of starting simple, meaning we’re going to release the carry version and the full size version and we’re only keeping it in 9 for right now. The .40 will be available very shortly and we’re kind of sticking with that because, again, it is very LE-driven at this point. So we’re looking at agencies that come to us and maybe their guns are aged and they need an upgrade or something like that, this is really what we’re focusing on and the rest of the commercial market… that’s kind of a secondary thought.

LG: Internally, how much does it have in common with Sig’s other modular polymer gun, the P250?

DK: The fire control unit is the same in the sense that you can pull it out and put it into different grip modules. As far as the works and all of the parts and everything, it’s completely different.