Relying on a .22 for self-defense isn’t something everyone is comfortable with. But for those who are, it’s not always clear which load to choose for this role. Our most recent batch of ballistic gelatin testing included both .22 LR and .22 Magnum with 2 and 4-inch barrels. Today, I’m taking a closer look at those test results and making a few recommendations for the best self-defense loads for handguns in these popular rimfire calibers.

Watch the details in the video below, or keep on reading for the full transcript.

A couple of weeks ago, we published the long-awaited results of our pocket pistol caliber ballistic gel tests. We tested 39 loads representing eight different calibers. You can browse through all of our data and photos on the post at Lucky Gunner Labs.

Today, I want to focus on just two of the calibers from this last batch of testing: .22 Long Rifle and .22 Magnum.

We followed all of the same protocols we have for our previous ballistic gel tests. Each load got five shots into a brand new block of Clear Ballistics brand synthetic gelatin. We used four layers of heavy clothing for our barrier. For these two calibers, we tested each load twice: once with a short barrel and again with a slightly longer barrel. And then we measured penetration, expansion, velocity, and we took lots of photos and a high speed video of the first round in the gel.

For right now, I’m not making any arguments about the pros and cons of relying on a .22 LR or a .22 Magnum for self-defense. I know using .22s in that role is a controversial subject. I’ve already covered all of that in detail earlier in our pocket pistol series. For the purposes of this video, I just want to consider which .22 loads have the best ballistic performance. So based on our test results, I’m going to make a few suggestions that might be helpful if you plan to carry a gun chambered for one of these calibers.

For .22 LR, we tested eight loads. The test guns were a Smith & Wesson 43 C snub nose revolver with a 1.9-inch barrel and a Ruger Mark IV semi-auto with a 4.4-inch barrel.

Let’s look at the snub nose performance, first. Here are the test results we have posted on Lucky Gunner Labs. So I’m just going to click up here to sort by barrel length. We got no expansion with any of these, which is not really surprising. And with penetration, the shot to shot performance was inconsistent with several of these loads.

That’s just one reason why it’s really important to not focus only on the average penetration depth. Look at the worst performing bullets in each test because that’s telling us something, too. You can get a pretty good idea of individual bullet performance from the chart here, or if you click on that, you’ll get a photo of the bullets in the gel. If you want the actual breakdown of the data for each load, you can click on the name of the load. That will take you to the product page where we’ve got all that information.

Back over on the main chart, we can see that with the snubby, every load had at least one round that failed to make it past 11 inches, let alone the 12-inch ideal minimum. So none of these are great, but it’s a pocket .22, so we’ve got to have realistic expectations. There are a couple that definitely performed worse than the others. And one in particular I want to point out: the CCI Stinger.

This load is frequently suggested as a good choice for self-defense if you’re going to use a .22 and I think that’s because the advertised velocity is a little higher than what is typical. I guess there’s an assumption that it will have a better chance of penetrating. That does not appear to be the case in this test with a snub nose revolver. The average depth was just 10.7 inches. With the longer barrel it only got 9.6 inches. I think the Stingers are probably better out of a rifle barrel that can really take advantage of its velocity potential.

For the snubby, it looks like you’d be better off with the CCI Velocitor instead. Three of the five rounds made it past the 12-inch mark and that might be about as good as we’re going to do with a short barreled 22. It’s interesting that the Velocitor did fairly well even though it was the second slowest load in our test with a velocity of just 888 feet per second. 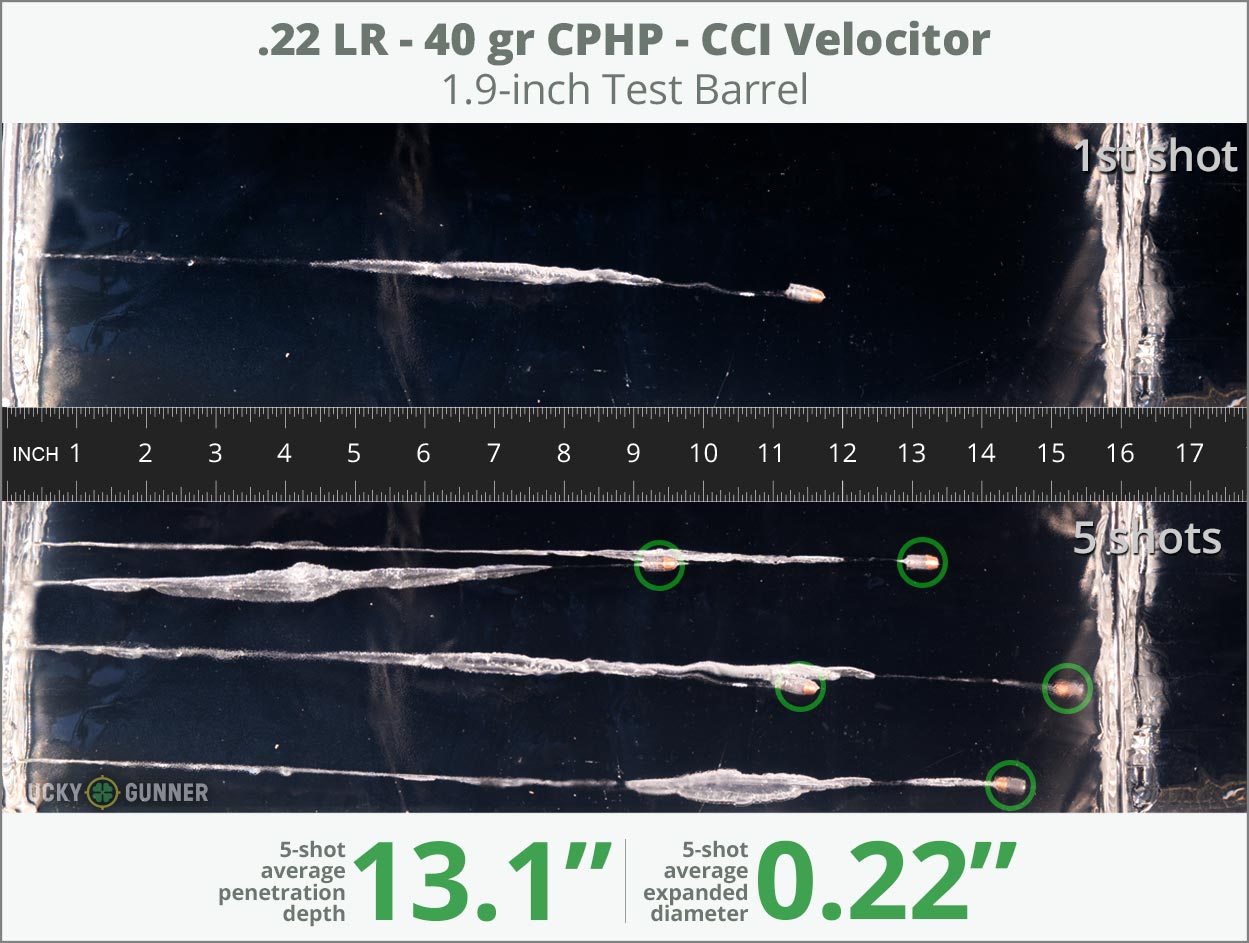 There was one other load with similar penetration and that was the Winchester Varmint HE. This is a segmenting load, so as soon as the bullet hits the gel, it’s shedding a few pieces that go off in different directions while the core continues to penetrate.

Usually, segmenting-type ammo is easy to dismiss as being pretty gimmicky, especially in centerfire handgun calibers. There’s not really any proven advantage to it for self-defense, especially when we’ve got conventional hollow-points that we know do work most of the time. With .22, it’s a little different. These Winchester bullets seemed to penetrate okay and the flat profile of the bullet core could theoretically create a more effective wound channel than a typical non-expanding .22 bullet. I don’t like the idea of shedding 30% of the weight of a bullet that’s already so light to begin with, but it’s not as if we’ve got some amazing alternatives for this caliber. So in this case, the segmenting load might be worth thinking about. Personally, I would probably stick with the Velocitors in a snubby or a pocket pistol.

With the longer barrel, our .22s gained an average of 129 feet per second, and that was enough of a velocity bump to make a big difference in the gel tests. The same loads came out on top, but they performed much better. All of the Velocitors had great penetration averaging 15.6 inches. Same with the Winchester Varmint load averaging 14.9 inches. Oddly enough, the humble Federal Champion lead round nose also did really well out of the Ruger with a 14-inch average.

Of course, as always, the gel tests should not be your only consideration for choosing self-defense ammo. With rimfire ammo in particular, reliability is the first concern. Fortunately, .22 ammo is cheap. Even the premium stuff is pretty affordable. So before you decide to load something up in your carry gun, test a couple of boxes of it and make sure it runs in your .22.

Okay, now let’s look at the .22 Magnum (aka .22 WMR) results. Our test guns were a 1.9-inch Ruger LCR and a 4.3-inch Kel-Tec PMR30. Because semi-auto barrel measurements include the chamber and revolvers do not, the PMR30 is roughly equivalent to about a 3 or 3 and a half-inch revolver.

We only tested five loads for this caliber. We didn’t test more than that because most .22 Magnum loads are made with rifle-length barrels in mind. Handgun barrels just don’t give them enough velocity to expand. Our preliminary testing showed us that almost every load was doing basically the same thing: moderate penetration with no expansion. So we tested just two of those traditional loads as a kind of representative sample. Then we also tested one specialty hunting load and two short barrel loads that actually are designed specifically for self-defense with .22 magnum handguns.

So again, let’s start with the snub nose revolver tests. The CCI Maxi-Mag hollow point and the Fiocchi Performance soft point were our two traditional-type loads. Both had zero expansion with good penetration between 15 and 16 inches.

The Winchester Varmint HV is a high velocity load that’s advertised on the box as 2250 feet per second. Presumably, that’s with a rifle. With our snubby barrel, it only averaged 1331. So it failed to expand as well and penetrated an average of 14.2 inches.

The Speer Gold Dot is one of the loads that’s made with short barrels in mind. It did expand to right around .33 inches on average. That’s 150% expansion which is what we like to see in a good self-defense load. But penetration was only okay. The average was 12.9 inches, but there were a couple of rounds that were a little short of that ideal 12-inch minimum.

We saw something very similar happen with the Hornady Critical Defense. The expansion was a bit more erratic and a few rounds were just shy of 12 inches.

If we look at the longer barrel, those two loads performed much better. The velocity increase was about 135 feet per second on average. That was enough to get almost textbook performance from the Critical Defense and the Gold Dot loads. 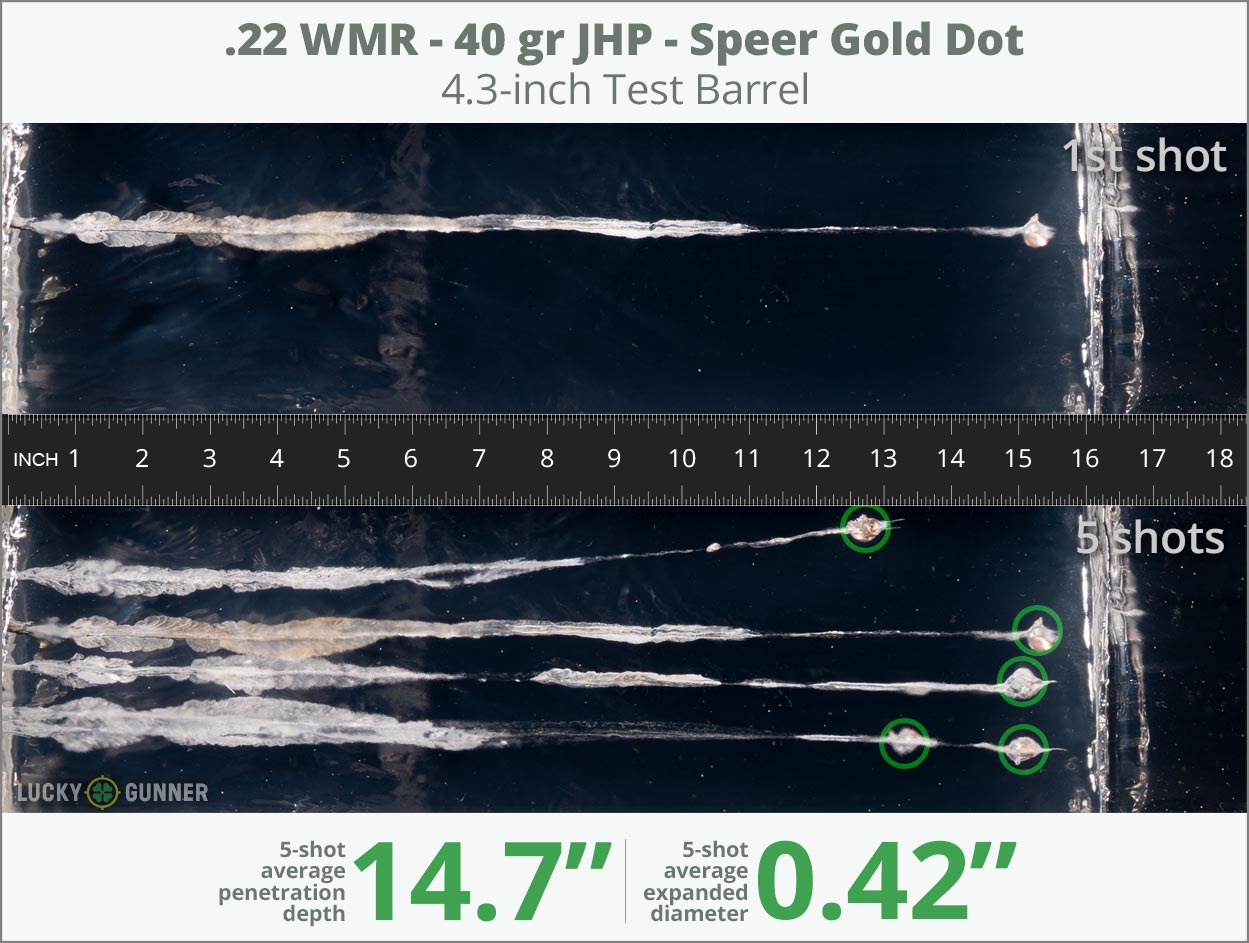 With the other three loads, there was almost no change. Penetration was just a little bit deeper in some cases, but not by much, and there was still no expansion.

If you’re looking for a good .22 magnum self-defense load out of a snubby, it’s kind of a toss-up between the short-barrel hollow-points and the more traditional loads. I personally prefer to err on the side of sufficient penetration even if it means there’s no expansion. Those expanding loads are a little on the shallow side for me. I would probably go with the CCI Maxi-Mags. They’re affordable and they make a good practice load. With an average penetration of 15.8 inches, it looks like a pretty good bet to me. But, you know, the Hornady and Speer really aren’t bad and you could probably make the case that the quality control tends to be a little better on premium loads like that.

Either way, I think it’s pretty clear that .22 Magnum does have some definite ballistic advantages over .22 Long Rifle, even out of a short-barreled handgun. Neither one of these calibers is coming anywhere close to its full potential with a snub nose revolver, but even so, the .22 Magnum is still quite a bit faster and more effective.

Be sure to take a closer look at that data yourself before you make any decisions about your carry ammo. That’s at Lucky Gunner Labs. And if you want to support this project or any of the other stuff we do here, be sure to get your ammo with lightning fast shipping from us at LuckyGunner.com.