Tweet
Use Type
Self Defense
See More Information
You can’t rely on brute force alone to overpower your attacker when you’re carrying a handgun chambered for 25 ACP. To get the most potential out of your little sidearm, you need a round with a bullet that’s designed to truly deliver when you’re in a tight spot. And that’s what Fiocchi’s Pistol Extrema XTP ammo is all about!

This round is capped off with Hornady’s 35 grain XTP, a jacketed hollow point projectile that is optimized for self-defense. The XTP’s jacket is special in three ways. First, it is given symmetrical serrations that enable it to promote wide, uniform expansion, even at the 25 ACP’s lower velocities. Second, its thicknesses vary throughout its entire length to fine tune the rate of expansion even further. Last, the XTP’s jacket covers the lead in its core, helping to prevent feeding issues in a semi-auto as well as damage to the nose cavity during penetration. The XTP’s swaged lead core also aids in uniform expansion, and along with Hornady’s signature concentric jacket possesses the rotational stability that accurate shooting demands.

Fiocchi is an Old World manufacturer that combines over a century of experience with state of the art technology. The draw straight prass, assemble sensitive and clean burning primers, and load highly consistent propellant charges. Their dependable components and thorough assembly process coupled with Hornady’s powerful XTP equate to a great solution for personal protection with a pocket pistol.
Ballistic Gel Test 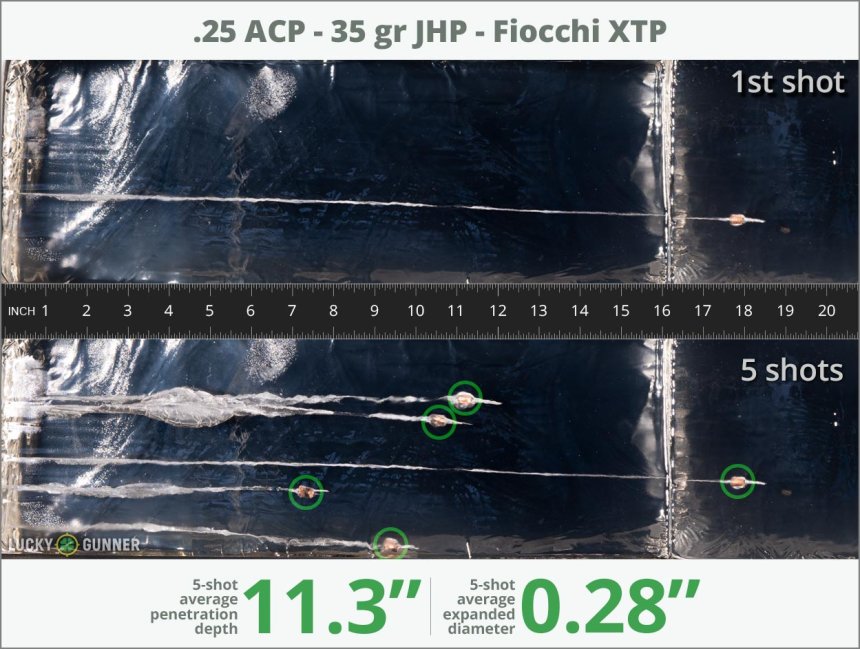 After firing five rounds of Fiocchi 35 gr XTP from a Beretta 950BS Jetfire into synthetic ballistic gelatin from 10 feet away through four layers of fabric to simulate clothing, we then measured the expansion and penetration of the bullets for this .25 Auto (ACP) load, which you can see in the chart below.

The photos below provide a detailed view of the the expanded bullets that were recovered from the gelatin. The high speed video shows the first of our five shots as it entered the gel.

Finally, if you'd like to see how this Fiocchi load compares to other .25 Auto (ACP) loads, check out the diagrams at the bottom of the page. Want to know more about our ballistic gelatin testing and self-defense ammo? Check out Lucky Gunner Labs for more information.

How do the results for this Fiocchi .25 Auto (ACP) compare to other 25 ACP Ammo?