If I had to pick one word to describe what living with the Sig P229 Legion RX for the last 1,500 rounds or so has been like, it would be “frustrating.”

To be clear, very little of this is the fault of the gun itself (probably). Mostly, the Legion feels great in the hand. The Grayguns laser-stippled E2 grip and straight optimized trigger only add to the experience. For those that don’t know, the Legion is a series of models that add some cosmetic and functional features to the classic P-series guns. The features of particular interest to us (and that still remain on the gun) are an undercut and checkered trigger guard, front cocking serrations, low profile controls, X-ray sights and a beavertail. The RX moniker adds a slide mounted ROMEO1 micro red dot sight.

The first 475 rounds fired through the gun were entirely consumed by zeroing and reliability testing. Somewhat early on, round number 252 failed to extract from the gun. As best I can tell, for some unknown reason, the extractor slipped off the cartridge during the ejection cycle. Either way, it counts as a malfunction against the gun. A failure to extract that early on in the test had me incredibly nervous that we were about to experience a long string of issues. That particular concern has so far proven unfounded, as the gun has fired another 1,100+ rounds without further issue. 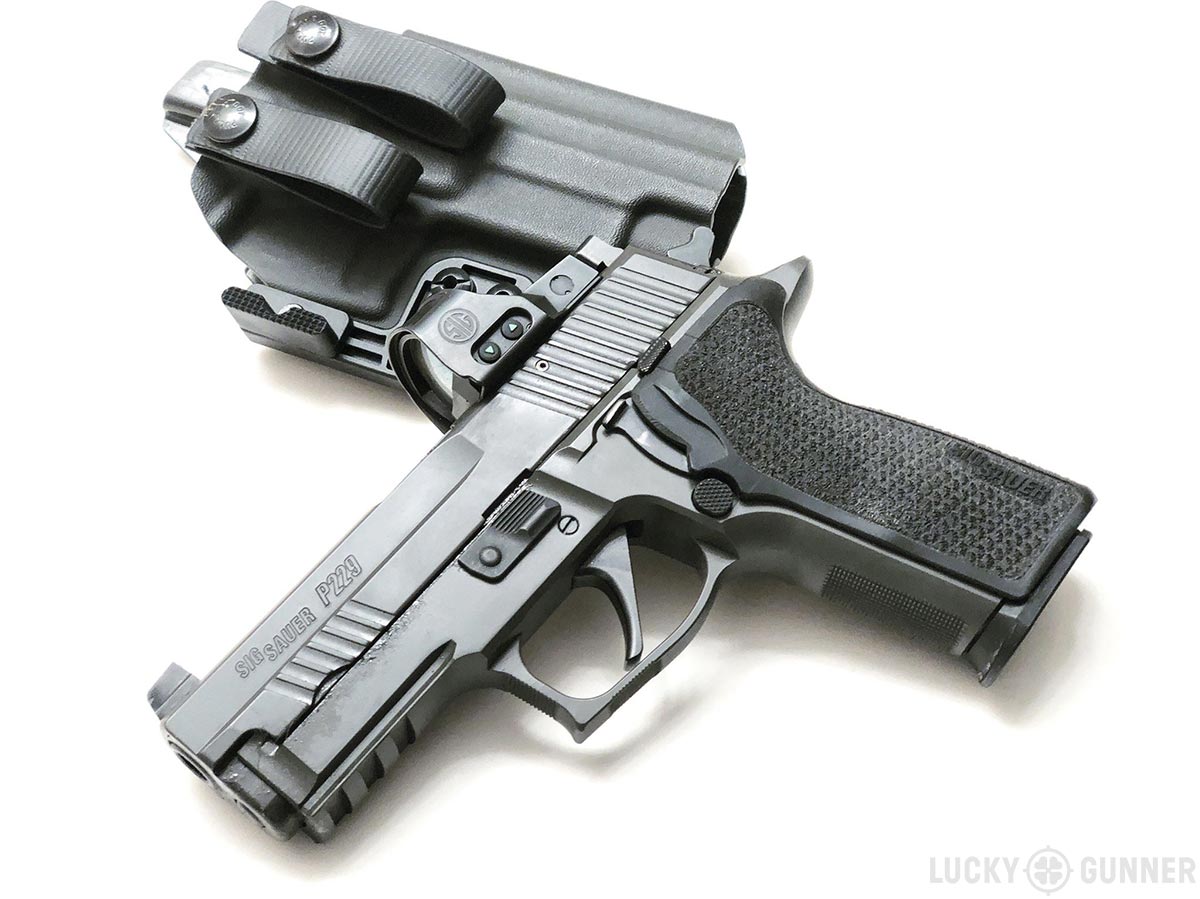 The first known standard that I shot with the Legion was The Advanced Super Test. This is something that I shoot very often, and have a lot of stored data on. Generally, I am able to shoot this in the high 280’s to low 290’s (out of a possible 300) on demand. My personal record on this test is a 297. If you keep in mind that I hadn’t shot this particular pistol on any known standards before these rounds, and keeping in mind it is an entirely different trigger system than what I’ve used recently, the scores are actually not too bad.

After shooting some more A.S.T.’s I decided to run some F.A.S.T.’s. This is where I encountered my first major complaint about the gun in its current configuration. First, the scores.

Generally, during my own practice sessions, I am able to run this in the mid 4’s to low 5’s with little trouble. This will occasionally creep into the mid 5’s if I’m having an off day. In its current configuration, the Legion P229 is nigh-impossible for me to reload efficiently. Most of this is due to the low-profile slide release that ships standard on the gun. I simply cannot hit it with my strong hand thumb with any reliability.

This leaves two options: using my support side thumb (which I also couldn’t do reliably), or running the slide itself with my support hand. Both are slower and it showed. So, my first major complaint about the gun is that for my hands, the slide stop is barely useable. At some point after the 2,000 round mark I’m going to probably end up putting a standard slide release on it.

My next huge complaint (that I didn’t discover until recently teaching a class in Arizona) is that the ROMEO1 is not bright enough for me in direct sunlight. There were multiple times while running demos during my Technical Handgun: Tests and Standards class, (which often has more demanding shooting requirements) that I simply wasn’t picking the dot up as quickly as I would with my preferred Trijicon RMR Type 2, because the ROMEO1 could not get any brighter. How big of an issue is this actually? I think this, once again, goes back to personal preference and what level of shooting performance you’re looking for.

While talking through a demo and shooting with compromised concentration, I shot what would have been a 100% on the current FBI qualification (had I not been using a 3”x5” head box as my scoring area). I mention that because I honestly can’t tell whether or not my complaints are founded, or if they are nitpicking on my part. More experimentation is required.

So, after almost 1,500 rounds, I’m not quite prepared to say whether or not this gun sucks. As I said at the beginning though, it is frustrating me in several areas. Currently, I absolutely hate the low profile slide release with a burning passion that is hard to describe. I’m going to give it another 500-600 rounds just to see if it grows on me, but I don’t think it will. Additionally, I don’t like the ROMEO1. Aside from the brightness issue I can’t really put my finger on why, but I think it stems from a lack of confidence in the optic itself, which is probably not fair. I’m very curious to find out how I will feel in another few thousand rounds.

The Verdict So Far: Does this gun suck? Maybe.